"My friend, I just read from the Philippines national newspaper (PDI 8/10/11) about people who made mockery of the Christ in the guise of being an artist. The work of art of a certain Artist M displayed at CCP, is I believed out of place, will led them to perdition. You knew what happened to Judas E. in the Bible, who betrayed Jesus because of money or fame...? Jesus Christ is the Son of God, yesterday today and forever, must be bestowed/regarded with the highest respect and dignity. That certain mideo and his friends, cruxified Jesus the second time around.... What can I say, Lord forgive them for they do not know what they are doing. I pray. Amen."

politics and politicians and leaders

COMELEC is now busy with the preparation of the 2010 elections, politicians are also busy with their coming propaganda/campaign in order to win the elections, the voters are also busy learning who will be the best candidate to win and lead this country for the next 6 years. I belong to the voters group, I wonder why many are interested to run and become president, to be president is power, but the power comes the great responsibility. I have had that experience of leading a small group of church goers, being the chapel leader, as a leader I have that great responsibility to make the fiesta celebration or any chapel activity to be a successful one, to show to the people that we are here to serve. I realized that to be a good leader must be good follower, you listen. Leading a group like that of a small chapel and a big country, i beleived is the same, you deal with people, you deal with leaders also. you must have visions, you have that direction for the common good. We hope to have that vision and and direction with action for the good of this country, This is my country, my country Philippines. We'll pray for the people in the COMELEC so that GOD guide them well in the conduct of this coming elections. Amen. . . .
Posted by Carlos at 1:47 AM 20 comments:

Since the first election that i was able to vote in the late 1970's, i observed that philippine politics onwards keeps on changing, not only the election code but also political party's. I don't know why, i believed, it is because filipinos are very dynamic, and changeable, that attitude of changing partners. Forget the political party, members are non-winnable, find some one from other parties who are better to be my partner, our politicians, why not stick to one, why not to die-hard on his party. This is our style Filipinos. not united? Why we cannot have that two party system. No, our group is more superior, we have the money, the machinery, and we are better, We boast of our capabilities, I hope the future change . . . We must first change ourselves. . . sana. . . this coming election, forget personal interests and think of service. . for our children and children's children.
Posted by Carlos at 1:13 AM 2 comments:

Need to rent a house in Davao City?

Residencial house located in the heart of the Davao City. Interested to Rent? Located in Bankal. Please contact this cel Nos. 09204735133, ask for loyca, only 500 meters from the National Highway and 7 kms from the City Hall of Davao. Very affordable, with 2 rooms, good for newly wed couple. floor area 39 sqm. Cable ready, with garage, parking space.
Posted by Carlos at 11:21 PM No comments:

On August 1, 2009 at 3:18 am, the then President of the Philippines, Madam Cory Aquino met her creator, They call her an "icon of democracy". I believed she is now beside the Lord Jesus, She is a good person. Every good person has a reserve place in heaven. I saw her bravery during the campaign in l986. How she braved the rain, the heat of the sun and the threat to her life when she made visits in the provinces. The country that time was in quandary. I attended in one of her campaign rallies for the presidential election. I was standing on top of the concrete bench I saw the crowd moving like tidal waves eager to see her, I did not move so as not to be stepped upon by the crowd, they shouted Cory, Cory, Cory, I too shouted, waving the yellow banner, I saw madam Cory at the stage waving her hands to the people, after a while the situation calm down. She started her speeches about the Martial rule, and many more and what had happened to our country, she was wearing yellow T-shirt at that time. The Cory magic was there, the place is filled with joy and happiness, I was 28 years old then. I can see how Madam Cory being loved by the people of Davao City, she won the elections here, the hardship and pain she went just to restore freedom. Then, our freedom is restored. To Madam Cory, thank you very much, I can never forget.
Posted by Carlos at 3:39 AM 7 comments:

This morning I witnessed the assumption to office of our Supervising Auditor in COMVAL Province in the person of Madam Dina Novelero, State Auditor V, by virtue of an Office Order issued by the Chairman of the Commission on Audit(www.coa.gov.ph). The Provincial Government of COMVAL warmly welcome her. She was introduced by no other than our Regional Director Rasol L. Mitmug, and witnessed by the Auditors of COMVAL and capitol employees and from the Regional Office. After some chikachika, the group proceeded to other offices of the capitol and ended-up with a dinner at the new Office of the Provincial Auditor. Fruits like durian, lansones, etc. and dinner were served It was fun and enjoyable with our fellow auditors exchanging pleasantries/jokes, etc. We were excited to hear some updates regarding the reshuffling, but there was none yet, except for some whispered statusquo. but I am pretty sure of movements of Auditors, considering the reinstitution of pre-audit comes August 1.

This July 31, will be the election of regional officers of the Philgasea, and organization of government auditors, I am running for Vice President, please help, thank you. Do you the visayan song titled "ALIMUKOY"? please send or post comments. thank you again friend.
Posted by Carlos at 2:17 AM 2 comments: 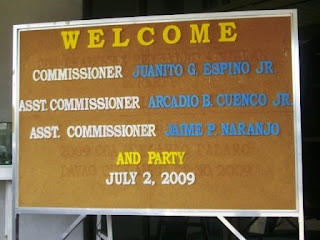 Last July 2, 2009 was the orientation seminar on pre-audit at the COA Regional Office No. XI with people from Central Office as the Key Speakers. It was a successful and interesting subject/undertaking considering the subject COA Circular No. 2009-002 and its amendments, (http://www.coa.gov.ph/) the restoration of pre-audit of transactions before payment is made, on a selective basis . It was no other than Sir Jimmy, Asst. Com. who delivered/impart his expertise on the subject, there was no untoward or violent reactions during the open forum. It seems that everybody was smiling til the end of the session. However, I also observed that some are lonely and felt stress because of the impending reshuffling of Auditors, they kept on thinking of their future assignments. We were expecting some kind of big announcements, but there was little. Movement of Auditors has been the subject of talks on various COA corners since the early months of 2009. There are rumors that Office Orders will be released very soon. They said, pre-audit will take effect next month. Well, we"ll just wait and see what comes first, let us do our job well as expected. There is no backing-out now. Do you the title of these songlines ... Hapiness is what I long for, loneliness is why i cried. . . When somebody leaves you. . .

I have promised my friend Rosamar that I will write my ideas, something regarding the seminar. Here it is Rose my Carlos ideas lang ha. . .. Thank you friend for reading, til next... Please give the title of the song.
Posted by Carlos at 6:09 AM 19 comments: